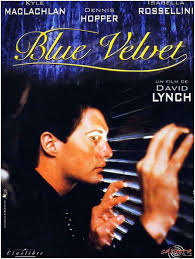 Blue Velvet (1986) is one of several films by director David Lynch that you'll see listed in my dream film series.  And this makes sense since Lynch would seem to be one whacked out dude judging by his films.  Dreamlike surrealistic stories and images pervade Lynch's films and Blue Velvet is an iconic pick from his catalog of films.

This film is presented on one level as a film noirish mystery and on another level as a surrealistic hometown America nightmare fantasy.  In fact, the film is all about levels and the intricacies of the seen and unseen in life.  There is the dark and light, the innocence versus evil.  Young lives are turned topsy turvy in a corrupted world.

It's a harsh film with rough language at times, violent images, and sex, but somehow it all seems fitting.  Like in a dream the adult themes exist on a plane where we accept them as a part of the subconscious evil side of the world.   The unsullied fancies of youth are tainted just enough to emerge out of the rabbit hole with a more jaded outlook about the way the world is, but hopefully not enough to destroy them completely.

In the Lynchian world of Blue Velvet life is strange, but we somehow manage to muddle our way through it all.   As a warning, this film is rated a hard R, but for those who can deal with that it's a rich dreamlike film experience.

Have you seen Blue Velvet or any of the other films of David Lynch?   Are you a fan of Film Noir?  Do you have a difficulty accepting graphic depictions of evil in films?