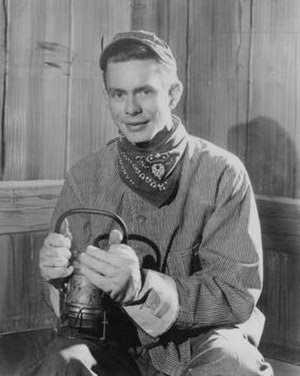 Publicity photo of Ron Penfound as "Captain Penny" (Photo credit: Wikipedia)
Since dreams are in some ways like movies, it makes sense that there would be casts of characters and occasionally guest appearances.  My dreams typically will have a recurring cast that includes family members and friends.  There are also a number of unrecognizable players filling important roles in dreams.  These characters either rarely reappear or their identities don't register with me so that I don't realize they've returned.

On some occasions there will be appearances by people who are actual celebrities or famous people.  At other times there will be characters whom I know as being famous in the dream but not known to me in waking life.

My blog buddy Stephen T. McCarthy related a dream guest appearance in a recent comment left on one of my A Faraway View posts.  You can click on the link for the full account, but to lift Stephen's description the man in his dream is "some famous old character actor (not a real person, but an old actor known to all of us in the dream)".


I've likewise had several dreams where a person will appear who is known in the dream to be a person of note, but someone of whom I have no knowledge in my actual life.  Perhaps these people have characteristics that relate to another person actually known to my conscious mind.  In the dream they may represent some archetypal personage that symbolizes something in the dream.


Usually I find these symbolic figures are played by what would normally be considered to be character actors or personalities who have some unique traits.  Some of the real life figures who have appeared in my dreams are William Demarest (Uncle Charlie from the television show My Three Sons), Andy Devine, and Walter Brennan.


One dream that I remember having when I was about 5 or 6 years old starred local Cleveland, Ohio TV personality Captain Penny.   In the dream I was watching Captain Penny on television.  He was interacting with a frog puppet, though the frog seemed very real to me.  At some point Captain Penny accidentally steps on the frog and kills it.  Everyone one on the television show seems distraught.  I am upset and wake up crying and feeling very sad.


I don't recall if the frog character was an actual part of the television show or not, but it was a character that seemed very familiar to me in the dream.  Since I watched Captain Penny nearly everyday he was a familiar face and an important figure in my young life.  Beyond that I have no idea what the meaning of this dream would have been, if there had been any meaning at all.


I don't know what the dreams with famous people represent other than the aforementioned concept of archetypes.  I don't think there is usually any direct meaning to the person dreamed about.


Have you had dreams about famous people?   Does your dream theater have a cast of standard characters who make repeated appearances in your dreams?   If so, who are they?    Are there people you recognize in your dreams or see in your dreams that you don't recall ever having seen in waking life?