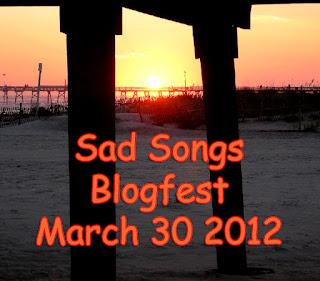 How could I resist this?  Diane at Spunk on a Stick is hosting a Sad Songs Blogfest so I'm in.  After all, on April First A Faraway View will begin the month long A to Z April Challenge and since my theme for April will be about dream music, this blogfest fits right in.  The way I see it, sad songs make for good dream music  I could go on and on with sad songs, but I'll stick with six sad songs to make it alliterative.

Make It All So Real        Steve Forbert gives a dynamic performance of one of the best story songs ever.  It's  not just a song about sad songs, but a song with a sad story.  Writers should take a listen to this ultimate work of flash fiction put to music.  This song always stirs me inside and gives me watery eyes.

Lalena   Originally written and performed beautifully by Donovan, I particularly like this version from my favorite Deep Purple album.  Sometimes called the "loudest rock and roll band", Deep Purple goes jazzy, smooth, and soft with a heartbreaking song that is a character study of a woman who seems to be a prostitute.


Pavane for a Dead Princess  -- With this title you know it's going to be sad.  This is a dreamy piece by impressionistic composer Maurice Ravel.   The video is pretty dreamy as well.  Listen to this and tell me that you don't feel a bit melancholy and wistful.

Round and Round  Neil Young is a master of writing sad songs--so many to chose from.  I chose this one because it makes me feel sad, but it's a beautiful sad.  Sad is not necessarily a bad thing, it's just a part of life.

Knowing That I Loved You So  This song may be by a group with a goofy name, but it has a hauntingly sad sound that really grabs me.

String Quintet in C Major, 2nd Movement --Perhaps not officially a song, its composer Franz Schubert is considered one of the great songwriters of the 19th century.  This movement of the quintet never fails to stir up a sad feeling within me, but it also leaves me feeling very peaceful inside.  Another one of my all time favorite pieces of music.  I think it's worth the investment of time to listen to it.

To visit other participants in the Sad Songs Blogfest go to the Spunk on a Stick blog.  Remember--posting for the fest officially begins on Friday March 30th.

Be here on Sunday April 1st as my musical A to Z dream journey begins.   I have some great music lined up for the month.

Dream Music of the Night

Music I hear or sense in my dreams before waking is beautiful and enchanting, heard delivered in ethereal voices or with chamber ensembles or orchestras.   Sometimes it may be jazzy sounding or a song that may have an air of familiarity as though it is something I have heard often.

I may lie in bed for a while trying to hear the music within my mind, but it is usually a sound so otherworldly that I cannot recreate it.  Some times I have written songs that were either based on my dream or came directly from my dream.  I usually have to add to the lyrics or try to recreate the lyrics I think I remember having heard, but they are songs that were delivered to me by a dream.

The question is are they original or derived from something I've heard sometime in waking life?  This could be a similar question that a writer or visual artist might ponder.  The fear of influence can paralyze us in our acts of creating.  Then again, the acceptance of similarity of theme done in our own style might be the better way to look at our creative endeavors.

Are our dreams tapping into new ideas generated from within us?  Or do our dream ideas have a connection to memories of things that are already out there but we just don't recognize them?  Perhaps our subconscious creative mind is taking old themes and turning them into new variations to suit our own perspectives.   Do you think the dreaming mind is creating or merely remembering in its own way?

Songs in the Key of Dreams

Image via Wikipedia
At times I may awaken from a dream that inspires a song.  The dream itself may have had nothing to do with music, but the dream story inspires a song which usually comes rapidly upon awakening.  In order not to forget the song I will write it down immediately and the song may stay in my mind throughout the day and sometimes for several days following the dream.

The following example is something I wrote around 1979.  I was on tour with The World of Fantasy Players from Charlotte, North Carolina.  Our summer tours took us northerly and it was June or July when we were in Montana.

I recall one midday as we were on our way to Livingston, Montana, as I was driving I saw a distant mountain shrouded with clouds.  That mountain stayed visible to me for the entire trip from Billings to Livingston. It was spitting snow when we arrived in Livingston.  We unloaded the show equipment under cloudy skies.  The day was more like a day in January.

That night I dreamed of that mountain I had seen and I awakened with a song that I immediately wrote down.  When I woke up it was still dark outside and the room was extremely cold.  I suppose I probably wrote the song "Lonely Hero" in bed.  I don't remember that part.

The song I wrote that morning put the dream content into verse and it told a story about a hero who lived on the mountain I had seen.   Here is the chorus of that song:

Then I close my eyes
To see a distant mountain
And I know that he is waiting there
To come again to me another night.

I'll Hear You In My Dreams

The song in my dreams sounds familiar.  I'm sure that it's a song that I've heard someplace somewhere in time.  I could probably sing the words if I wanted to.  When I awaken I am usually hearing that song in the dream I was in.

If write it down as soon as I wake up then I can capture the song and its melody is in my mind.  I used to be able to think the song over and over throughout several following hours and memorize it, but now I have more distractions.  The memorization method works well if you are involved in a long repetitious activity such as mowing a large lawn, driving a long distance alone, or working on an assembly line.

Sometimes  the rhythm of the repetitious activity can set the tempo for the music.  I replay the song until it's stuck in my head.  When I was younger I took the time to do this.  Lately I've been waiting for the songs to come.  They're there--I remember hearing them.  Now I apparently don't pay enough attention to the songs I'm hearing.  I can no longer sing them.

Do you hear songs in your dreams?   Have you ever written dream songs down?  What are the songs like?

The following is a Federal Duck sample that you can choose to listen to if you wish since the following post refers to this song.


Recently the music of Federal Duck crawled out of the recesses of my memory causing me to go to YouTube--my standby for digging up the music from my past.  Sure enough, the whole Federal Duck album can be found there.  As I listened to these songs that I hadn't heard in years, I was transported to that time many years ago when as a college student I would spend many an hour in the basement of my parents' house listening to record albums.

This album is a rather odd duck, if you'll pardon the pun--one to which I have felt strangely drawn like many somewhat peculiar albums I have in my collection.  I initially picked it up in the cut-out bin of some forgotten store.  It had been marked down from 99 cents to 49 cents.  I always love a bargain.

Some of the tunes are endearing novelty songs and crazy jazzy excursions that at times border on annoying, where other tunes are sad pschedelia.  For me it is the music of dreams or dreaming.  This may be partly because the music is the sound of a younger day in my life.  In its genre, this is the exemplary sound of the late 60s--a hallucinogenic soundtrack of solitude and angst.

I've gotten a lot of listening pleasure out of this album that I'd give a five star rating if I were reviewing it by Amazon standards.   Searching the internet I found that the CD version of this album is no longer in print, but CD and LP copies can be found in the $100 range.  I guess I'm not the only one who appreciates this album.

The song that I've used in this post, "Tomorrow Waits For Today", plaints with a cascading piano riff and a shimmery electronic organ behind a melancholy vocal.  A hypnotic drum line drives the music.  The song reflects on the passage of time in its most mundane sense giving the inevitability of growing old a resigned melodic sigh.  This is late night sorrow music or listening for a lonely Sunday afternoon.

And indeed tomorrow does wait for today in all that we do.  The Blogging from A to Z Challenge is a month away, but we have today for the time being.  Now is the time to be putting out the call for more to join us is this grand blogging event.

It's also time to be getting your ducks in a row so to speak.  I've got my posts lined up for this blog, A Faraway View.  During April my theme will be "Dream Music A to Z".   I will be covering songs, artists, composers, and music styles that are suggestive of dreams to me.  They may be songs about dreams or music that puts me in a dreamy state of mind.

Like I've done in today's post, I will offer a video selection that you can listen to if you wish.  It's all optional--nothing will play automatically.  I encourage you to at least listen to part of each selection as you may discover some music with which you are unfamiliar and may actually enjoy.

In preparation, during the month of March my topics on this blog will all be related to music and dreams.   I hope you will enjoy this two month series dealing with two topics that interest me:  music and dreams.