The Variations On A Theme Dream 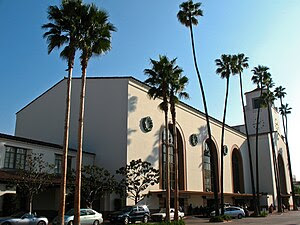 Image via Wikipedia
There is a commonly used musical technique called variations on a theme in which a particular theme is stated and then repeated in various ways with alterations to the theme made each time that theme is restated.  In some renderings the motif may essentially remain intact where it is still easily recognizable as the theme originally heard, while other restatements may sound so radically different that only a highly trained ear and one having the knowledge of the progression of the theme sequence might be able to identify elements of the original theme.  Each time the motif is played, the song remains the same but is presented in a different way.

In this post I am proposing that we sometimes might experience a similar effect that I will call variations on a dream.  This dream state involves an image or story sequence that states the initial idea.  Then, in either one continuous dream or a series of dreams that are interspersed between periods of waking and sleeping, the dreamer experiences a repetitive dream that may have variables that will change the outcome or direction of each dream story.

Here is my example:

In a dream experienced a few nights ago, I am taking the light rail from the station nearest my home to another location which I am expecting to be downtown Los Angeles.  Nothing looks familiar to me, but I take it in stride.  There is a sense of disorder to the place where I end up and my plans (what are my plans?) are apparently thwarted so I decide to return home.  I feel lost and feel that I may have missed my train.

At this point I wake up and remain awake for perhaps twenty minutes as I consider a train trip that I am planning later in the week.  I ponder my transportation choices, my destination, and the possibilities of things that could go wrong.  I fret upon intangibles of the trip that I will be taking in a few days.  I am afraid that I will not be able to get back to sleep and think about getting up to have a snack since I feel hungry.  Then I eventually drift into sleep. 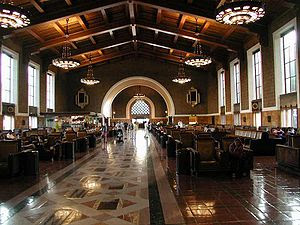 Image via Wikipedia       Again I am going to be taking the train downtown.  My son is with me.   He is about eight years old.  We are wandering through a vary large train station, but it does not look like any train station where I have ever been.  We go to a vending stand to buy a snack to eat.  We wander outside and walk on the sidewalk of an unfamiliar area.  There are vegetation covered hillsides and no traffic on the streets.


Next I am at a train station with my father.  We meander about the station.  I go outside to where there is a traffic filled freeway.  I see what seems to be a late sixties model car about to enter the freeway.  This car pulls over to where I am and I see my friend Sebastian in the passenger seat.  He thanks me for taking him to a party supply store where he found some items that were of use to him.  In my memory I distinctly recall being in this very large party supply store with Sebastian and looking about for some time.


Once again I find myself in the train station.   The place is huge, but I see no trains.  Now I am with my youngest daughter.  We are looking for a train.

I wake up thinking about trains.  I am thinking about the train trip that I will be taking later in the week.  I decide that later I will look on the internet to see what the train schedule is and also how much time it would take to go to the train station by bus instead of driving.

Here is my conclusion:

Later this week I am planning on going to meet with blogger Yvonne Lewis from Welcome to My World of Poetry.   She is coming to Los Angeles for a few days and will be staying downtown.  Since I am not comfortable driving my vehicle downtown I've decided that I would take the train on that day.  However, since I am not accustomed to taking the train on a regular basis and have never taken the train to the particular location where I will be going, I am experiencing a little bit of apprehension.

My other experiences with taking the train have always gone well.  Perhaps I'm feeling more uncertainty since the park and ride station is one I have never gone to on a regular work day.  Or maybe I've become too accustomed to being at home and am uncomfortable with going out.

Whatever the case may be, I believe this series of dream variations is intended to help me work through whatever has been on my mind concerning the trip by providing some different scenarios of possibilities.  The dream stories make little sense, but that is probably due to some symbolism.  The latter factor may indicate  a deeper interpretation could be in order, but on the surface I think the dream variations are primarily rooted in my apprehension about this future event.

But this is the simple answer.  In reality the dreams probably exist on so many different layers and are so expansive that the previous paragraph is the part that I see immediately without looking much further.  Much like the enormous train station in the dream story, there is so much yet to be explored.   The dreams are deep and the variations could go on forever if my mind allowed.