The Little Movie Dreams that Could

A to Z co-host Nicole Ayers of The Madlab Post returns with another movie related to the film she's been working on.  You can help by visiting her site for Abyss and doing whatever you can to get the word out and help Nicole achieve her dreams of waking life.  But first a dream from sleep.


The Little Movie Dreams that Could

Foreword/Prelude: I had this dream sometime in November or December while in production on my short film, “ABYSS.” Coincidentally, I experienced a lot of difficulty trying to find locations for this movie. One of the apartments that I originally looked at fell through weeks leading up to the initial shoot date and another one became unavailable several dates before production started. After contacting City of Philadelphia Film Commission officials who (supposedly) help filmmakers find locations in the city, and coming up short, I eventually had to start thinking small and simple by talking to people who I’ve been directly or indirectly connected to in one way or another, to find locations that would suit my needs.

I walked into the house of my grandmother’s neighbor, hoping to ask if I could shoot there but I saw the eldest sister sitting in the dining room going through a table covered with papers, folders and envelopes. Instead of the ask, I reluctantly said “Do you need help with anything?” – She responded “Yes – I need you to make sense of this will” while giving me a handful of papers. Since the homeowner had died many years ago and left the property to her children, I wondered if the eldest brother passed away. If so, maybe the sister was trying to get his affairs in order. Unfortunately, she never said anything else about him during my visit, so I just assumed that he might be the one who is dead. 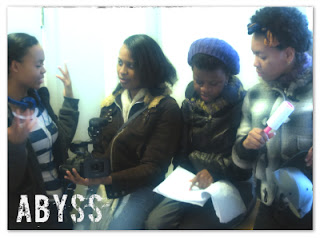 We spent more time organizing the papers and testing different features on the three TVs she had, than “making sense” of any will. Later, she started to leave and that’s when I asked if I could use the house. She said yes, gave me the keys and left. Just like that!

I stood in the foyer – figuring out whether the place would be even viable for a shoot and that’s when I was approached by an older, flirtatious guy who was working on the house next door to this one. This roofer -- builder or whatever he was, followed me throughout the house despite me making it clear through my answers and demeanor that I was not interested in him or his comments, nor did I want to be bothered with some strange man following me around in another person’s home. He asked me questions about “John,” the youngest son. 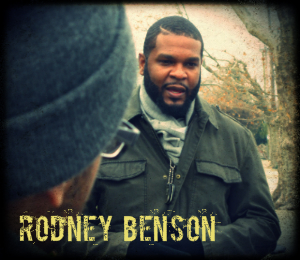 Some of the actors and crew showed up by this time, some of whom were outside on the sidewalk. Rodney (the leading actor in ABYSS) got into an argument and confrontation with the builder guy and out of nowhere, the husband of one of my childhood friends appeared to defend Rodney; I thanked him for helping to ease this problem. When I did, however, Rodney started yelling at me “What are you thanking HIM for?”
Next, I went into my grandmother’s house and found my cast and crew there, sans the men. All of the females working on the movie were in the house – weird. Titi (she plays Rodney’s girlfriend in ABYSS) was in the bathroom and I didn’t have any food for them but there was a cake in the kitchen, so I offered that for breakfast. They declined and we all started getting ready to shoot some scenes for the movie, when I encountered a problem – Rodney is nowhere to be found? He’s from New Jersey and is not familiar with areas of Philadelphia, so where the hell did he go? 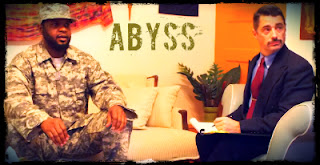 Have random, unrelated people ever appeared in YOUR dreams? Do the people in YOUR dreams ever suddenly disappear, leaving you wondering why? What sense and/or explanation would YOU make of this particular dream of mine?

Be sure to check out Abyss for more info.