A to Z Reflections for the Challenge of 2014

An Increase in Followers for A to Z?

For starters, if you're reading this and not yet following this blog, I would appreciate it if you'd take the time right now to click on the "Join This Site" button at your right.  I'd love to hit the 200 follower mark for the 2014 Challenge.   Thank you in advance if you have done this.   Let me know in the comments that you've done so and if I'm not following your blog already I will do so now.

During this year's Challenge on this blog my follower increase was relatively small which would be expected since my visits here were very low in numbers.  As typical during April there were more visitors at the beginning and these dropped to about half by the end.

Putting it into actual numbers brings into perspective how poorly this blog did.  During the first half of the Challenge I was getting an average of 15 to 20 page views per post with about 5 comments per post.  After the letter "N" my views dropped by about half averaging a paltry 10 per day with 2 comments on each post.

Granted this is one of my lowest performing blogs.  I don't do much to promote it either so I guess I shouldn't complain about the visitors.  Judging from my stats though I can see how some A to Z participants might be disappointed if they were showing something similar.

Taking into account my own lack of promotion, my increase of posting to six days per week instead of the usual one, and the vast competitive pool of A to Z bloggers I was up against, my showing though not stellar was not stagnant by any means either.  I had my usual visitors who remained loyal.   If I were to measure weekly visits and comments without taking into account the number of posting days, there would be an increase of visitors and comments to this blog.

I kept the theme simple with short posts.  During April each post featured a film that had to do with dreams or had dream-like qualities.  I had hoped that the nature of the theme would have attracted more viewers with more discussion.  My films may have been overly obscure or it may not be a type of film that many people are interested in.

If you missed my recommendations I encourage you to review them and leave comments wherever you find one that interests you or where you have something to say about the film.   I generally respond to all comments even when they are on old posts.

The Future of A Faraway View

This blog mostly exists because of my own interest in the topic and the fact that I do have a small pool of regular visitors.   The blog has potential, but due to my current blogging load I will probably continue here as I have in the past.  Posts may continue to stay short or even become shorter.   Guest posts are always welcomed, but I have not been active in soliciting posts from guests.

My dream blog is not going anywhere--at least not yet.  Since it is an underperforming labor of love it would probably be my first blog to go if I were to start dropping blog efforts that consumed too much of my time.  Or if not dropped, this blog might go to sleep for an extended period.   We'll see about that.

In any case, I want to thank all of you who visited A Faraway View.  A special thanks goes to JoJo at Tahoma Beadworks & Photography and Lisa at Lisa Buie-Collard--they were constant visitors to this blog during April and I appreciate that support.

Hope to see more visitors and get more comments in the future! 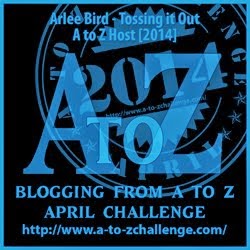