CAN WE COMMUNICATE WITH OTHER SOULS WHILE WE DREAM? - Grandpa’s Guitar

Again I am pleased and honored to welcome blogger par excellence Stephen T McCarthy whose wonderful writing can be found at Ferret-Faced Fascist Friends and Stuffs.  Over the the span of two posts Stephen will be offering a couple of dreams that suggest the possibilities of dream communication with others.

My maternal Grandpa, Floyd “Bulldog” Schulz, passed away in November, 1989. Some years later, my Grandma began throwing away and giving away (to non-family people) a number of his belongings that held special meaning to many of us. It wasn’t malicious at all, but she was at an advanced age and just wasn’t always thinking clearly.

I was amidst a large group of people whom I believed to be movie “Extras”. We were waiting to be called to the set and gathered together in a large building with pews, like a church. At the other end of the pew in which I sat, was my Ma, and in the pew behind me were a few (fictional) friends.

I had the old Sears Silvertone electric guitar that my Grandfather had given to me years ago, and I passed it back for my friends to examine. Sitting beside one of these imaginary friends of mine, I saw the ghost of my Grandpa (for in the dream, I was aware that he was actually dead).

The ghost of my Grandpa did not appear like a specter, but seemed to be fully physically present and I was shocked by his presence and yet comforted to know that he was still around.

As I passed the guitar back, one of my friends almost lost his grip on it. I instinctively reached out to catch it if it fell, and my Grandfather did the same simultaneously. But my friend secured the guitar in his hands and began looking it over with interest.

My Grandpa then crossed one leg over the other and was gently and slowly kicking the upper leg back and forth as he used to do when he was content or self-satisfied. But I was the only person capable of seeing him. Later in the dream, I told my Ma that Grandpa had been present because I was sure she’d be delighted to know that.

I believe this was not so much a dream as it was an actual communication from my deceased Grandpa. The guitar was real and he gave it to me when I was 13 or 14 years old. I was taking guitar lessons at the time, and I used the old Sears Silvertone electric guitar until I lost interest in the lessons. The guitar just collected dust thereafter, but my Grandfather often made mention of it. 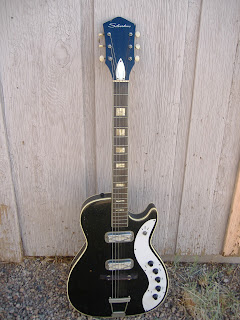 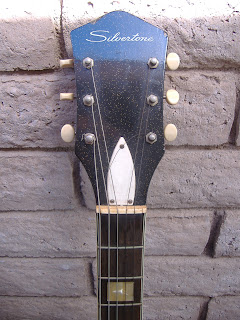 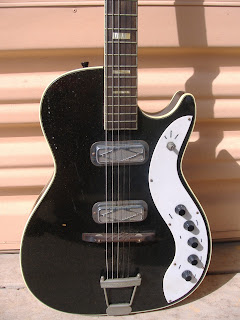 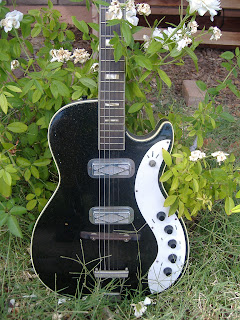 In 1978 or ’79, while working on the ‘JAMES AT 15’ television series, I was asked to bring the guitar with me to be used as a prop for a prom scene in the TV show (however, I don’t believe it was ever actually utilized on the episode we were filming).

The Pop/Rock duo England Dan & John Ford Coley (who had a number of hit songs in the ‘70s, including ‘I’d Really Love To See You Tonight’ and the excellent Todd Rundgren-penned spiritual ‘Love Is The Answer’) portrayed the band hired by the high school for its senior prom.

While on the set, working on that ‘James At 15’ episode, one of the two musicians, either England Dan or John Ford Coley (I didn’t know one from the other) saw my Sears Silvertone guitar and offered to buy it from me. I declined to sell it because I still considered it my Grandfather’s guitar.

When I moved to Phoenix from Los Angeles in May of 1995, I left the guitar in my Grandma’s basement. My Mom was anxious to get the guitar back for fear that my Grandma might sell it, give it away, or throw it away. While back in L.A. on September 9 for my Cousin’s wedding (19 days before having the dream described above), I retrieved the guitar from the basement and took it to my parents’ home.

I believe the dream – which referenced the actual history of the guitar having once been present on a Hollywood television set – was my Grandpa’s way of using me to get a message to my Ma that he was very pleased by her decision to get the guitar back into “secure hands”.

Three bits of evidence lead me to believe pretty strongly that this was not just a dream, but a genuine communication from a soul on “the other side”: 1) The dream was extremely vivid; 2) the dream occurred such a short time after I had actually “saved” my Grandpa’s guitar at my Mother’s urging; and 3) the way my Grandpa expressed his satisfaction with the situation by crossing one leg over the other, placing a hand on the top kneecap, and then gently, slowly, kicking the uppermost leg forward and backward.

Later, in real life, when I read the description of this dream to my Ma, she said that she didn’t know what I meant by my Grandpa’s “satisfied leg kick”; so I demonstrated it for her, and the moment she saw it, it all came back to her and she clearly remembered that he DID have a habit of doing that when he felt “all is well”.

And the truth is that if I had not seen my Grandfather do that in the dream, I myself would NEVER have consciously remembered that little idiosyncrasy of his. The forgotten “satisfied leg kick” was the major piece of evidence that convinced me I had really been in communication with my Grandpa while I was in the dream state and he was in the “Heavenly” state.

What do you think about Stephen's dream and the interpretation?   Have you ever received a communique from beyond or from someone else still living?   Do you think Stephen should have sold the guitar if the price was right?